Due to high volume, it may take longer than normal processing time to ship. We are working diligently to ship orders in a timely fashion. Thank you for your patience. 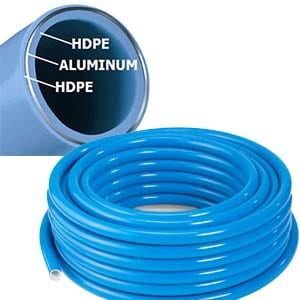 Aluminum is a metal with the chemical symbol Al. Aluminum is produced from bauxite ore. Unlike iron, copper, and other metals used throughout human history, aluminum production is highly energy intensive. Pure aluminum was first produced in 1824 and the first industrial process for producing aluminum was presented in 1854. Aluminum has a low density compared to other metals and, as such, was critical to the development of airplanes in the early 1900s and satellites in the 1950s. Aluminum alloys are used in construction to take advantage of their light weight.

Aluminum alloy has many benefits when used as a compressed air piping material. Aluminum alloy is rigid and does not sag like plastic piping. Moreover, compared to plastic piping material, aluminum is not susceptible to gas diffusion. Aluminum is easier to install than other metal pipes, since other metals require connections that are threaded and welded or soldered, whereas aluminum alloys can be connected using compression fittings.

HDPE is a polymer that has a very high strength to density ratio. Specifically, for its density, HDPE has a relatively high tensile strength. HDPE is used in many applications but may be most familiar for its use in milk jugs. HDPE is recyclable. Because HDPE is produced without the chemical BPA, it has replaced polyvinylcarbonate and polycarbonate, in many uses.

When used as a compressed air piping material, a layer of aluminum is sandwiched between layers of HDPE. This brings the best of both worlds to the resulting piping. The aluminum prevents oxygen diffusion, and the HDPE provides strength while adding minimal weight. HDPE does not corrode, which minimizes the risk that flakes of material will enter the air system, and has a smooth surface, which reduces the energy to push compressed air through the compressed air system.

Polyethylene of Raised Temperature (or PE-RT)

In contrast to HDPE, which was first synthesized in 1953, PE-RT is a relatively new material, having been introduced in North America in 2003. PE-RT was invented as an alternative to HDPE that is able to withstand higher temperatures. However, it was also found that PE-RT is more resistant to chemicals and slow crack growth. Most significantly, PE-RT meets all food safety regulations of the U.S. Food and Drug Administration (or FDA).

Like HDPE, PE-RT sandwiches a layer of aluminum when used as a compressed air piping material. Again, this provides a composite material that resists gas diffusion, yet is light, non-corroding, smooth, and food safe.

Nylon was the first commercially successful polymer. Nylon was originally synthesized in 1935. Nylon was first used for toothbrush bristles and women’s stockings in the 1930s and during World War II, almost all nylon production in the U.S. was used to produce parachutes and parachute cord. Nylon is strong, light, and resistant to corrosion. It is flexible and resistant to moisture.

When used as a compressed air piping material, nylon tubing is resistant to cracking and is stable under heat and light. Most significantly, nylon is relatively inexpensive. Moreover, nylon is easy to install with push to connect fittings. Remember that regardless of which material is used, ease of installation also means ease of repair and maintenance. For example, leaks in a compressed air system can be costly. A small 1/8″ hole in a system operating at 100 psi can cost more than $1,200 per year in wasted energy. Thus, it is worth considering the time and energy that will be used to maintain a system and fix leaks when choosing a piping material.