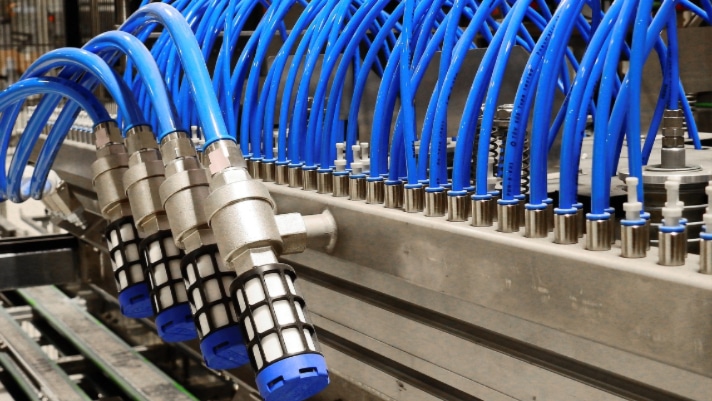 A compressed air piping layout requires careful consideration while keeping the intended use and applications in mind. A poorly planned compressed air distribution design will increase power losses through an inefficient discharge of air through the layout.

For a successful project, you need to consider factors such as installation, design, and routine maintenance to minimize costs and increase productivity. In this article, we look at pressure drops and how to mitigate such issues using a loop or straight-line configuration.

To the uninitiated, leaks may seem like the most common problem in air compressor distribution installations. However, pressure drops often prove to be more significant due to piping and layout problems.

One common problem with poorly planned layouts is sharp corners. When gases or fluids are flowing, they tend to slow down as they approach a sharp bend. It is in much the same way that a car has to slow down when it changes direction. A lot of energy is then lost in the process.

Maintaining the pressure level is critical in compressed air systems. If the machine is receiving fluctuating pressure levels, it will reduce efficiency and could ruin the equipment. To solve the pressure problem, users sometimes increase the discharge at the intake to reduce the drop. Unfortunately, it can direct a higher flow to other parts of the system. Additionally, it will force the compressor to use more power.

One solution that is recommended is using a looped system for your compressed air piping layout. Unlike a design with sharp corners, the looped structure allows gas to flow to all parts of the system unobstructed. Because the fluid flows with little resistance, it can increase the technical rating of a looped layout compared to straight-line pipes.

There are situations where straight pipes may be advantageous. That is in manufacturing plants or shops that are narrow and long. In such cases, there is usually no need for a loop design, since the pipe installations often do not need the tubes to curve or bend sharply.

A ring system is also not suitable where the point of discharge and point of consumption are significantly far apart. In such cases, a separate supply should be arranged to feed the system. It is also important to remember that straight line tubing layouts are cheaper to install and maintain than a loop system.

If your work area is square, a loop system is often a great choice. Loop systems have two advantages; they create distinct parallel paths to the point of use and secondly, it means the pipe will have the same consistent dimensions throughout the system.

You also need to choose the right pressure ratings for your loop layout. Since a loop creates less friction within the system, it has a higher rating for the same tubing as a straight-line design. A straight line pipe of the same rating installed in a loop configuration can cause pressure drops and restrict the flow of the fluid.

To make the most of your layout design, ensure you do the following: